2018 has been a solid start for me joining the training ranks. Of our runners over obstacles over half have won or been placed, but perhaps more importantly we have built up a nice team of horses to go into next year.

The obvious highlight of the year has been LATE NEWS. Back in March the 4 year old son of LAWMAN provided me with a my first winner as a trainer. He has since become somewhat of a stable star and has been a brilliant advert for what we can achieve by showing progression and consistency with every run. What’s perhaps even more remarkable than his 4 wins this year is the €68,000 of prize money he has earned for his owners – a lucrative return on a private purchase of €1,000 just over a year ago.

LORD PIT’s victory at Fontainebleau was a proud moment, when carrying my blue white and beige colours into the winners enclosure for the first time. Despite not being overly big, he has shown a tenacious attitude to win again since then and has become a favourite with us all in the stable.

The start of the meeting at Cagnes-sur-mer this winter was a roller coaster of emotions. After having a perfect start to the meeting with an impressive winner, we were then very unfortunate to lose the life of MISTER TIC. He was a homebred horse with a great personality which will leave a void in the stable when we return to Avilly in the new year. As I have said to the press before, incidents such as this are heartbreaking at the time but it does make you savour the good moments even more.

Looking forward to the week ahead and into the New Year we have several horses with good chances left to run in Cagnes. Christmas Eve looks to be a busy one with my brother Adrien teaming up with LATE NEWS in the Prix du Cap Benat and UNA CHICA declared in the Prix du Cap Ferrat in the saddle of Paul Dibatista. I am pleased to report that LATE NEWS is in flying form as always and looks set to give a very good account of himself again. UNA CHICA is a new recruit to the team and I am still getting to know her, she looks well and she should be in with a chance of a place. Both ANTISEPTIQUE and SCHINNDLER suffered small setbacks after running earlier in the month which are thankfully now of no significance. I will wait a week with both of them and they will be entered to run once more before the end of the meeting. All being well LORD PIT will make his debut over the chase on 27th, he has come out of his winning run happy and has been schooling consistently well out on the track in the mornings. If he continues his good run of form he will be entered in a Listed race on 6th January.

Over the year ahead we have a number of young horses to look forward to including the exciting purchase of a big grey gelding by LORD DU SUD named GRAND LORD, who I am already particularly fond of. We are lucky to have a few new horses joining us from flat yards to take to the obstacles; having proved our ability to do this during 2018 I am eager to see what they can go on to achieve.

Finally, I would like to thank my staff for their hard work and commitment throughout the year. A big thanks must also go to my owners who have entrusted me with their horses during my first year training, I appreciate that without their support my ambition of becoming a trainer would not have been possible. There have been so many people wishing us well and I am truly grateful to all that have shown their support during this early stage of my career.

I would like to take this opportunity to wish you all a Happy Christmas and an enjoyable 2019. 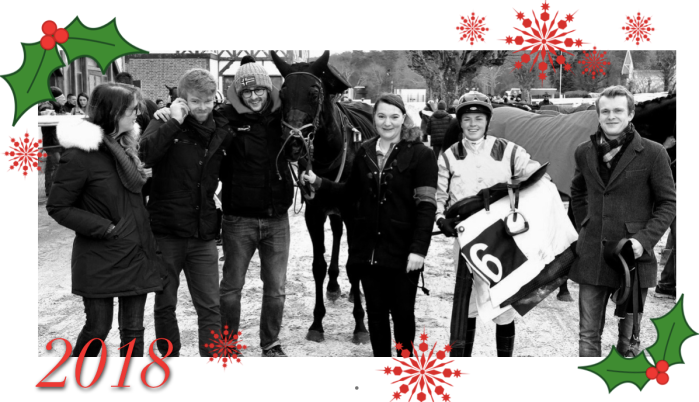